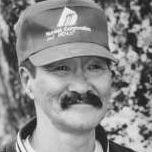 Enook Manomie was a multimedia artist born in Kinngait (Cape Dorset), NU. He learned some of his skills by observing his father, who was the well-known sculptor Mannumi Shaqu. Manomie’s favoured subject was Arctic wildlife, which he explored across various media including sculpture, drawings, prints and jewellery. Manomie's work was featured in a number of solo exhibitions in Toronto, where he launched his career. His artwork is held in the collections of major institutions such as the National Gallery in Ottawa, ON, and the Winnipeg Art Gallery in Manitoba.